An Interview with DI Russel 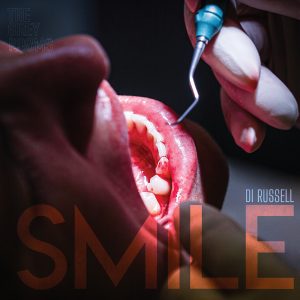 Roomies….The doctor will see you now! Follow me to exam room 2, take a seat and let’s dive into our second episode of Season 4- I hope you don’t have any cavities or you might get sick from DI Russel’s new twisted tale, “Smile.” You never know what might be found under the plaque.

But for now, get comfortable, lay back in the chair while I adjust the lights… don’t mind me as I lay out all the tools and drills we’ll need, but let’s leave the novocaine behind….

GR: Welcome back to the show DI.  You’ve been with us for multiple season’s now, and I personally love seeing what you come up with every year- tell us how has it been seeing The Grey Rooms transform and grow from season to season-?

DIR: The rooms themselves (the stories) have maintained their high writing, performance, and production values, and as one who loves routine, I look forward to each episode as I know what I’m getting. First, it’s a new score, then perhaps hearing a familiar voice actor (I’ve been lucky enough to have my characters brought to life by Gabe Templin and Lindsey Kelly twice, and Mark Whitten did a stellar job taking us all for a run on season 3!) The story is always fantastic…but the cherry on top is always the ending, which is the Grey Room signature move, is it not?

The transformation has been outside of the rooms themselves. The story of season 1 set the lore and the rules…but it had kept its cards close to its chest. Listeners knew nothing about the purpose of the rooms, where the rooms came from…and what’s Bob’s deal exactly? I recall that this started the Discord discussions as fans traded theories.

While each subsequent season has revealed details little by little, the loss of mystery is replaced by depth and story. We get to spend more time with these characters and learn more about them. The rooms really have grown into their own little mythos.

GR: I think that’s one of the things I love about the show, things could so easily get stagnant with the format, but learning about Bob and the world you get deeper and deeper into the characters and motivations themselves, which is just incredibly fun to see- Do you have a favorite moment from the show?

DIR: I believe it was possibly in The Way Out from Season 1? Going back a few years! But I remember a scene where the character is trapped in a hotel room and looks through the peephole in the door. There’s a woman entity in the corridor that screams? I think this was my first Grey Rooms jump scare, and I remember thinking, well played.

GR: Gotta keep everyone on their toes and give them a fright! Speaking of, I think with this season’s story- I just knew from the moment I started reading your submission, that it would be the right kind of terrifying/phobia inducing style story for our listeners. I have to ask– How did you come up with the idea for this story?

DIR: This one wrote itself! I have three rules for a Grey Rooms story: 1. Swing as far away from the last story as you can, 2. Don’t do something predictable, and 3. It has to be audibly interesting. So with this story, 1. I wanted something far removed from the loud, large scale following Personal Best, wherein I got to destroy an entire city. I wanted something quiet and in a single setting, almost like a play. As I was throwing ideas around, I happened to have a dental appointment. Perfect setting! But then 2. No traditional dentist horror with drills and torture (is it safe?). Finally, 3. The dental surgery is such a rich place for unique sounds! It ticked my three boxes.

GR: You did an amazing job of hitting all the right phobia’s. I know reading through Discord when the story went live so many of our listeners got the creepy crawlies from reading that story. Tell us about what it’s like building the scenes in your writing or the world that your characters live in-? You’ve taken us on quite a few adventures in different places now.

DIR: Because the scripts for the rooms are shorter than my usual works, I try to keep them slim and tie together a few elements. For example, the elements here were the dental surgery (fresh from my visit), someone I used to live who worked long hours to appease their pushy father, and finally, at the time of writing I was bogged down with paperwork for research ethics applications, which made me think of labs and experiments, chemicals and animal studies, etc. You just mash them together and see how they stick! Sometimes it’s about balancing those factors just right. There’s only so much screen time, so it has to be tight. This often leaves to listeners (looking at you, Brooks!) feeling there’s much more to the piece than the story allows, and often, yes, you could include more backstory, etc.

DIR: I know that I tend to write stories set in the present day, which can cause all kinds of problems. For example, I’ve just finished editing a novel written years ago, and the pop cultural references make that blindingly obvious! So things like that have to be written around. As for the settings, I’m quite boring and set my stories in the mundane places we visit in the day to day. I mean, where have we gone so far in my Grey Room visits? The house of the local butcher, a playground, a jog through the city, and now a dentist. I suppose that grants them some relatability? The rooms have ventured into space a few times. Maybe I’ll have to challenge myself and give that a go one day!

GR: You always build really rich scenes, which is one of the reason’s we love inviting you back each season. What about your characters-? Do you have a favorite character trait you like building into your characters?

DIR: I’ve been known to put a few winks to Richard Laymon readers in my work over the years. Whenever something goes through a character’s eye I think of him, plus I put in the odd reference to characters finding or putting something in ‘a good, secret place’.

As for traits, I think I always have to include at least some flaw. No one likes a perfect character. In fact, it’s one thing I like to do: make my main characters obnoxious, and still have the reader along for the ride.

GR: DI, Tell us about the weirdest experience you’ve had that has led to a story- or the weirdest thing you’ve researched when writing a story-?

DIR: I have had a few weird things happen to me over the years. Something that worries me about placing these events directly into a story (as with other personal things) is the reader reception. Once an event is written and out there, in part it belongs to the reader and their interpretation. This might cause conflict when a perception is challenged by the insistence that it isn’t quite fiction! In the worst cases, I could put something into a story and share that this was a real experience, and have the unpleasantness downplayed or mocked. Know what I mean? So anything too real is layered and woven, like the unconscious coming through in a dream. For example, I went through a very strange occurrence as a child and I’ve always been wary about laying this out bare in a story. It was only years after finishing a novel that I saw glimmers of it peeking through in the story, but still carrying enough fiction to make it palatable to my psyche, I guess. I know I didn’t really answer the question! I also tend to not research anything weird, more absolutely mundane things just to get technical details right.

GR: How do you feel about podcasts expanding the world of fiction publishing?

DIR: Podcasts are a wonderful new (Are they still considered new? Or now that I’m getting on a bit, am I losing touch?) avenue for fiction. I never really got into audio books, but podcasts raise the bar with the extra production. It harkens back to the days of radio plays! I listen to podcasts in the car all the time now.

GR: I think more and more authors are looking to podcasts like us to bring their stories to life instead of just traditional publishing. But speaking of publishing–What projects are you working on now?

DIR: As I mentioned earlier, a brand new novel has just been edited and should be out soon… We haven’t set an exact date and I have no idea when this will be posted, so it might even have hit by now! The novel is called Playthings:

A beautiful daughter, a successful husband, an idyllic living in the English countryside. She had it all.

Following a tragic event, Charlotte Hayes struggles to find a place in a new life thrust cruelly upon her. Caught between her overbearing mother and interfering younger sister, Charlotte is forced to face her past: a childhood condition long repressed, and distorted memories and secrets buried by her family.

How can you know what’s real when even your memories lie?

Playthings. As simple as make believe.

GR: Thank you again DI for taking the time to sit and chat with us… even if the Warden only allowed you to escape a room for a small amount of time.

If you’d like to hear more stories from DI Russell, you can take a peek behind the door and check out these episodes: Personal Best, Down, Summer Child