An Interview with Donald McCarthy 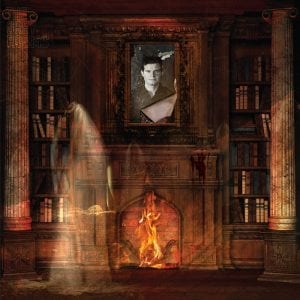 Good Morning Roomies… dust the ash and ember off your clothes from the last harvest and have a seat. It’s story time again! Get your blankets and gather round.  You know what story-time means for The Grey Rooms… *cue thunder and lightning, drapes dramatically flapping in the windows*… Mwahahahahahaha!

We had a chance to sit down and chat with author Donald McCarthy, as we learned alot about his inspirations in the writing world, and the way audio can help build an atmosphere. Let’s dive head-first into the deep end of this week’s story ‘Too Much’.

GR: Welcome to The Grey Rooms Donald, we are loving all of the new blood this season. ‘Too Much’ has been a fun/unexpected story for us to work on, have you been writing for a long time?

DM: I’ve been writing for as long as I can remember. One of the first stories I recall writing was about a knight lost in the woods. This was in second grade.

GR: We haven’t seen many knights around here yet. It’s always fun hearing about the authors that start writing from a very young age. Can you remember what it was that first got you interested in writing? I’m kind of curious how long it took you before you started wandering down the path to horror?

DM: I don’t know if I can point to a specific incident, but I do know one important moment was watching the original Star Wars and realizing that someone made up their own universe. That seemed fascinating to me. It wasn’t until late in high school that I specifically started getting into horror writing, but I have always been interested in the weird and surreal.

GR: I think ‘Too Much’ is a good example of that, it takes such a big twist into the category of ‘weird and surreal.’ You must have some interesting horror inspirations in that realm that feed into your writing.

DM:I enjoy the lurking terror that inhabits the films of David Lynch or Stanley Kubrick’s The Shining. In those films, you feel ill at ease. It’s not jump-scares that do it, rarely do either Lynch or Kubrick use them, but the dread that fills every frame. There is a profound sense of wrongness in works like these, and they rarely end with that feeling dissipating.

GR: Kubrick and Lynch are great storytellers that way- the creeping feeling that something’s off.

DM: I also like horror that leaves you with very specific images. I’m thinking of the vampire kid knocking on the window in Stephen King’s ‘Salem’s Lot’ or the Babadook crawling across the ceiling in Jennifer Kent’s ‘The Babadook.’

GR: Don’t even get me started on The Babadook! That is definitely a character you’d find in the rooms. I think writing visually is something people don’t think about often when they talk to writers outside of film-is that something you like to base your work off of?

DM: Yes, usually with an image. The story will grow out from there. What prompts that image is never consistent, but so far they haven’t stopped coming.

GR: I bet that makes a bit of a difference when we are talking about stories in an audio format. What has it been like hearing your story produced as a podcast episode?

DM: Certainly interesting. It takes some of the power out of the writer’s hand as now others are interpreting your work through voice acting. That can be scary, but it can also lead to a more interesting take than the original writing had. But horror is about atmosphere, especially in audio.

GR: Well hopefully we’ve done ‘Too Much’ some justice in that realm. I think that atmosphere is something we are constantly trying to perfect here at The Grey Rooms. What kind of projects are you working on now?

DM: I’m always working on a bunch of short stories. I had one come out in May in the magazine Raconteur, and I have one coming out in December in ParABnormal Magazine. I also have a chapter in a book on fear in film that came out this autumn called Our Fears Made Manifest. You can always keep up-to-date on my writings at www.donaldmccarthy.com.

GR: I’m really interested in your take on ‘fear in film’ I’m sure it will be a scream.

Thank you again Donald for taking the time to sit down and chat with us, and we hope to hear more from you here in The Grey Rooms.