An Interview with Candice Greene 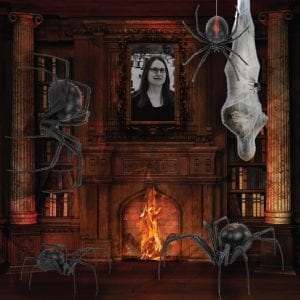 Happy Holidays Roomie… collect all your stray matter, take a towel and dry off from that dip in the pool. It’s almost time to enter your next door. Lets dip our toes into another week and a new episode of yule-tide terror.

As we sit around the roaring fire, roasting chestnuts and being merry, we had a chance to sit down and chat with the author of this week’s story ‘Strings’.

Candice Greene has previously filled us with terror through seasons 1 & 2, but we learned some truth as she filled us in on her nearly 20 year absence from the world of horror, and the way she takes inspiration from her dreams and runs with it.

GR: Welcome back to The Grey Rooms Candice, you’ve been one of the few authors we’ve had that have been with us every season- though most of your time here has been spent terrifying listeners in pre-season episodes.  Have you been writing for a long time?

CAG: My first memory of writing is from third grade. I wrote a poem for a contest.

GR: Did that get you hooked on writing at a young age?

CAG:  I started writing complete stories in the mid 90s. A friend and I would tell fanfiction stories to each other, and that evolved into writing on computers.

GR:  And the digital age of terror was born. You have such a great grasp on scary stories, Were a lot of those early stories horror based?

CAG: Although I was into horror flicks as a teenager, I didn’t start writing horror until 2017. But, once I moved out of my parents’ home I could no longer tolerate watching the scary movies I used to love. I fell out of reading and watching horror, and nearly twenty years later, I still can’t tolerate being scared out of mind. Occasionally, I’ll read books by Stephen King or Joe Hill. I recently watched The Quiet Place with Emily Blunt and really enjoyed it. These days, I’m more into dark fantasy than horror.

GR: With your apprehension to watch horror movies, it makes me wonder what it’s been like hearing your story produced in this format as a podcast episode?

CAG: My first story on The Grey Rooms was “I Didn’t Have Arachnophobia, Exactly”. Hearing that story come alive gave me chills, and the sound effects terrified me, even though I knew what was going to happen! “Seashells” on the second season of Grey Rooms had a bittersweet undertone since it was set in a dystopian future. I fangirled when I heard who they got to play the lead actress. I’ve been a fan of Erin Lillis since her debut on The NoSleep Podcast. Hearing that story come alive was disturbing but also made me feel nostalgic for more innocent times. I can’t wait to hear “String”! I’m sure I’ll be grossed out by the depths Grey Rooms takes it.

GR: Jason does love to make the most of things that might gross others out and punctuate those parts of the story. It’s really interesting that you almost have a love/hate relationship with horror now, especially since you do it so well. How has that changed how your story ideas come to you?

CAG: Many times my stories come to me as dreams. Sometimes my dreams are as intense and vivid as movies, so I can’t help but write them down. The fantasy series I’m currently working on started as a dream I had at the end of January 2017, and within eight weeks I had around 200,000 words written.

GR: That must have been an extremely intense dream to get 200k words out of it. It sounds like writing has become such a large part of your life and how you interpret your dreams, and your daily life.

CAG: I’d say so- I run three local writing groups that meet in various places around my city, including coffee shops, libraries, and restaurants. I also have two dedicated writing spaces–a desk at home and an office space down the street from my apartment.

GR: Leading this band of renegade authors around your city, you must get a lot of new people joining. What would be the best piece of writing advice you’d give to authors just starting out?

CAG: Just write. Writing, just the story and I, is the best place I’ve ever been. Polish your piece as best as you can. Have someone else look over it, perhaps even edit it. Then submit it. You never know what’ll happen if you don’t try. Even if your story is rejected, it doesn’t mean you shouldn’t try again.

GR: What projects are you working on now? – If you don’t mind me peeking behind the curtain.

CAG: My current work-in-progress is a YA fantasy trilogy set in the distant future. After humans sent the world into an early ice age, dragons came out of hiding and took control of the planet, subjugating humans and outlawing any other shapeshifters. Galina, a were-snow leopardess and Master Hunter for her small village, is snatched from the only life she’s ever known and plopped down in a new world on the brink of war. As Mate to Dragon-King Azeltine, she’s expected to give him dragon-sons and abide the rules set forth long ago. Galina never does as she’s told and fights back. Slowly, she comes to realize King Azeltine isn’t the man she thought he was, and together they must fight an evil that threatens the safety of all Earth’s inhabitants.

GR: I’m on the edge of my seat already, the story sounds like such a page-turner!

Thank you again Candice for taking the time to sit down with us, and next time don’t be afraid to send some dragons our way. If you’d like to hear more stories from Candice Greene, you can take a peek behind the door and check out these episodes: I Didn’t Have Arachnophobia Exactly, Seashells