An Interview with Arthur Unk 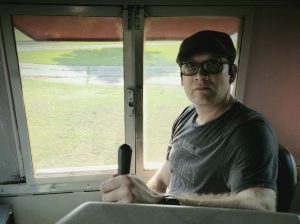 Happy Halloween Roomies…. *cue thunder claps, demons cackling and other halloween noises* (… this is what you get when we’re used to making audio content.). Welcome to our second preseason story of Season 4! We’re kicking off Halloween with Arthur Unk’s ‘Dead Air’ playing across the airways. So tune in Roomies, take a seat, and don’t mind the straps… those are only meant for your safety…

GR: Welcome back to The Grey Rooms Arthur, well really… you’ve never left. I always see you kicking around our Discord talking with new people and helping other authors. Can you believe we’ve made it to Season 4 already? You’ve been with us for multiple season’s now, how has it been watching The Grey Rooms transform and shift from season to season?

AU: I’ve been a part of the Grey Rooms since pre-season 1. The story quality keeps getting better with each season. The Grey Rooms knows how to cultivate talent and every person involved gives 100%. The community keeps expanding and the Discord channel allows everyone a chance to feel like they are a part of the lore and history being created in the Grey Rooms. Every new episode feels like a blockbuster movie. Also, the writing talent formed a bond over last season and there is a healthy exchange of ideas to keep Management in stories for several more seasons.

GR: And let’s be honest- there would be Hell to pay if we didn’t keep Management knee-deep in stories that can turn into the next locusts. (Season 5 Submissions are open!) Do you have a favorite Grey Rooms moment?

AU: Any scene that involves Warren Richardson or Mike Lee always brings a smile to my face. The musical score and original songs by JM Scherf add an ambiance that is second to none. The number one moment for me of all time was the original song featured in Ice Station Bravo, All in My Head. It was a surreal moment that will live forever in my headspace.

GR: Ice Station Bravo is always going to be one of my favorite Grey Rooms episodes, it felt like more than just a regular zombie thriller, you really felt like you were there. Can you tell us about the weirdest experience you’ve had that has led to a story- or the weirdest thing you’ve researched when writing a story-?

AU: Ice Station Bravo was written when I was freezing in a tent during a military exercise. The Ride was a partial reflection on my time as a truck driver traveling through the American Southwest. A World Worth Saving was based on my love for horror movies and several small towns in Germany. I’m sure there’s a new story waiting in the wings as I travel the world in search of my next real-life adventure. I love going to strange places and talking with strangers (as long as they have good candy).

GR: I mean… it’s almost Halloween Arthur… no one is going to pass up free candy. How did you come up with the idea for Dead Air?

AU: I took inspiration from a discarded short story, the movie the Warriors, and The Kirlian Frequency (Netflix). I also wanted to write a story that included a specific type of transition between the scenes. I was scared to write it because I’ve never written a story like this before. The setting provided several unique challenges to overcome. I was grateful to pick the brain of fellow Grey Rooms author and radio personality, C.M. Peters, to help make the story more realistic.

GR: You work with a lot of authors on Discord, I know i’ve personally seen a lot of submissions that roll across the submissions that you’ve helped edit for newer authors. Give us a few secrets-  Tell us about what it’s like building the scene or the world that your characters live in-?

AU: I use as much personal experience as I am able to when setting a scene. I try to shape the world through the characters’ perceptions. Sometimes the situation calls for an unreliable narrator and that’s where the fun can truly begin. A first-person perspective is too narrow for some authors to navigate a story comfortably. I enjoy having a left and right limit to help guide my characters’ choices. There is a freedom to be found within the nuanced “writing rules” of the Grey Rooms.

I’ve placed characters in a desert, an icy hellscape, small European towns, big cities, pretty much anywhere I’ve been or experienced in real life. I like knowing first-hand the touch, smell, and feel of different environments. I tend to like smaller towns because I’m from a smaller town. The people are a little more, “all up in your business.”

GR: I think that’s one of my favorite things about picking up new books to read. You’re really transported into these different atmospheres, these different times in history. It always makes the experience richer. But as we talk about thumbing through those pages, I have to ask- How do you feel about podcasts expanding the world of fiction publishing?

AU: Podcasts, such as the Grey Rooms, are essential as an entertainment medium. The ability to transport the audience to a different place and/or time is similar to reading a book. I just get a kick-ass soundtrack and special effects as an added bonus. I always fear that there will come a day when I’m let down and the produced story will not live up to the hype I give it in my brain, but each and every time the Grey Rooms staff delivers an unparalleled experience. The Grey Rooms Discord server adds another layer of interactivity to connect the team to the fanbase. Quite a few fans took the stories as inspiration and created their own version of art. That is the greatest thing any creative talent can ask for.

GR: Everyone really should check out the our writing servers in Discord, seeing these little fanfic stories pop up are such a fun twist on the world. Outside of the Rooms, What projects are you working on now?

AU: My website is always in a state of chaos, but will hopefully be fully up to date by the time this publishes: http://www.arthurunk.com

I’ve published several stories in anthologies and am getting ready to open my own publishing/editing company. More details to follow when I get the green light on that project. But I’m always writing or editing something. I never know what’s going to pop up next.

GR: I see a lot of big things in your future Arthur, and I know this won’t be the last time you take a trip around the rooms. Thank you again for taking the time to sit and chat with us… even if the Warden only allowed you to escape the rooms for a small amount of time.

If you’d like to hear more stories from Arthur Unk, you can take a peek behind the door and check out these episodes: Ice Station Bravo, The Ride, A World Worth Saving