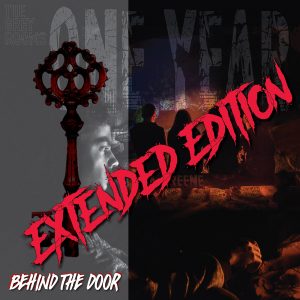 Ready for the next door Roomies… I don’t know if you’re ready yet…. You don’t know exactly what we have planned, and we’ve got some holiday goodies for you. First lets peek behind the door with author CA Greene as she talks about her Season 4 story, ‘One Year.’

GR: Welcome back CA! You’ve been with us for multiple season’s now, really, you’ve been one of the few authors who have had a story in every single season of the rooms. Tell us how it’s been seeing The Grey Rooms transform from season to season-?

CAG: Hearing my very first story on the podcast blew me away. Every year since has only gotten better. Sound quality has improved beyond what I already thought was good. It seems every season there’s something new to look forward to – voice actors, sound effects, fantastic music and promo pictures and videos. I don’t know how y’all manage to outdo yourselves every season. It’s truly amazing to watch.

GR: This show is the gift that keeps on giving. Do you have a favorite Grey Rooms moment?

CAG: This’s a tough question because I have two favorite moments, both from Season 1. I think I talked about how hearing my first story produced in audio format felt last season. So I’ll go with the frenzy of activity that ensued after submitting to the contest in the very first season. After listening to The NoSleep Podcast for roughly a year, Jessica McEvoy created a book club on Facebook where we would read books by NoSleep authors and have a monthly themed writing prompt. It was in this club that Charlotte Norup posted about the contest forThe Grey Rooms. I decided to give it a whirl and after submitting maybe the day before the deadline, I figured it would take a while for the producers/editors to go through submissions. Assuming I should wait a couple weeks to check my email, I went on with my life. One day, I woke to find a zillion Facebook notifications and friend requests from Charlotte, Graham Rowat, Brian Black, etc. They all wanted to tell me one thing – I had won the contest! Of course, I immediately accepted all the requests, answered all the messages, and emailed Jason back. It was like, for a day, I was a famous celebrity whom everyone wanted to talk to and be friends with. For as long as I live I will never forget how special that day made me feel.

GR: I didn’t know that’s how you had first come to find the show, was just a little before my time, but you’ve blown us away season after season. I have to ask-how did you come up with the idea for this season’s story?

CAG: “One Year” came about last summer, in a similar fashion as “Strings”, my last story featured on last season of The Grey Rooms. I had finished my project for Camp NaNoWriMo early and was looking for something to occupy my time at a write-in. The idea of a troubled young man getting caught up with a nefarious stranger struck, and I knocked out the story in no time. I let it sit until the next submission window for Grey Rooms, tweaked the ending to fit the parameters, and sent it in – again the day before the deadline. I seem to do that a lot. Haha.

GR: Even though you snuck this one in right before the deadline, you always build really rich environments for your characters to live in. Tell us about what it’s like building those scenes/worlds.

CAG: In NaNoWriMo terms, I’m a pantser, meaning I write by the seat of my pants. Sometimes I can be a plantser, both pantser and plotter, but it’s rare for short stories. I typically write those so quickly I don’t have time to plan out details. I’ve also heard it called discovery writing. I get a snippet of a character or a plot line or a scene and run with it. With practice, I’ve learned to keep things succinct. When I first started writing short with The NoSleep Podcast Book Club, it was difficult to keep stories under 10,000 words and from meandering into dead ends. For me, writing is like exploring a new world with new people. I discover, along with the characters, who they are and what’s going on. Oftentimes, finding out characters are going to die is hard for me emotionally. In the case of novels, I’ve spent months getting to know these people. Sometimes they even become more real than people in my life. Seeing them suffer or get killed off can be devastating. At the end of one book a bunch of characters were suddenly killed. I stopped writing for a long time because I had to grieve those deaths.

GR: Lets talk more about the character’s that you get so connected too as you write. What’s it like building those stories out? Do you have a favorite character trait you like building into your characters? Any fun easter eggs for us?

CAG: My absolute favorite person to write is a strong female protagonist. They’re always flawed in some way but no matter what comes their way they keep on going, they keep fighting. I see a lot of myself in that kind of character. For easter eggs, I’ve actually found ways to connect my novels. I’ve started about four different series over the past four years and all have one character that pops up in each. It’s almost like how Stephen King says everything he’s written is in the same universe.

GR: I love that, those are always my favorite finds when I’m reading. That hidden character or theme that ties all of the tales together and makes you want to pick up the next book in the series or find other stories that the author has written. Tell us about the weirdest experience you’ve had that has led to a story- or the weirdest thing you’ve researched when writing a story-?

CAG: While researching the most expensive beers in the world for a YA fantasy book, I was led to Brewdog’s The End of History 55% ABV beer. This UK company packaged a limited line of beers in stuffed animals. The pictures I found were of stoats with the end of the beer top sticking out of their mouths. There’s a video on their website but the pictures I found with the Google search “stoat beer cover” are quite spectacular. Here’s a link to the article: https://www.brewdog.com/blog/the-end-of-history

GR: Now that’s an article I’ll have to dive into! What projects are you working on now?

CAG: I have plans to publish the first book in a fantasy trilogy about a woman who can turn into a snow leopard at will by summer’s end. After the death of her mother, she’s ripped from home by dragons, creatures she had thought were myth, and plunked down in a new life as a dragon king’s mate. Only dragon men are allowed to shapeshift so the protagonist must find a way to escape before her secret is discovered. She gains new friends along the way and slowly realizes the king isn’t a terrible person. This leads her to believe that maybe, just maybe, she can get him to let her and the other women who don’t want to be dragon mates go.

GR: Thank you so much for sitting down with us today CA, It’s always a pleasure and I can’t wait to dive into more of your stories!

If you’d like to hear more stories from CA Greene, you can take a peek behind the door and check out these episodes: I Didn’t Have Arachnophobia Exactly, Seashells, Strings